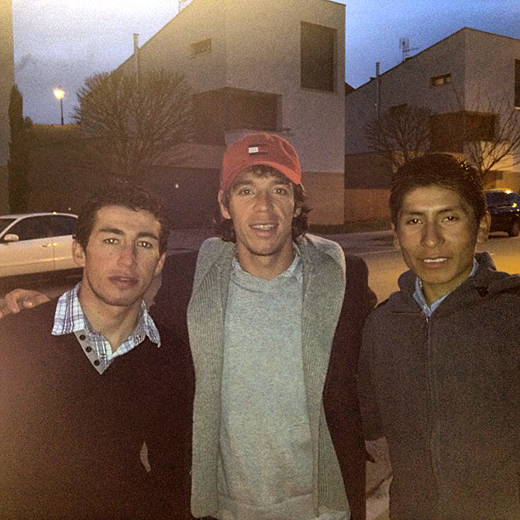 Back in the 1980s, the Café de Colombia team lit up the climbing stages of the grand tours. The great Luis ‘Lucho’ Herrera, otherwise known as El Jardinerito (The Little Gardener), won the mountain classification in all three grand tours and even won the Vuelta d’España in 1987.

We haven’t seen much of Colombian riders in the Pro Tour since the demise of the Café de Colombia team in 1990. Perhaps certain ‘training techniques’ allowed lesser climbers to keep up with these masters of altitude, but now there’s a whole new generation of Colombian pros that are lighting up the peloton.

The new wave are more than just mountain goats. They’re much more rounded riders than the previous generation, able also to perform in the tough one-day Ardennes classics or in the race of truth against the clock. Perhaps this is partly due due to them being picked up and groomed by top-flight teams with big budgets and all the benefits of modern sports science.

Sergio Henao and Rigoberto Uran are instrumental to Team Sky’s pain train when the road turns up. Uran turned in such a solid performance in the Giro (including a very strong TT ride and a mountain stage win), that when his leader Wiggins wigged out, he was well enough placed to take a very convincing second overall. Nairo Quintana (Movistar) stole the Tour of the Basque Country from Richie Porte, with Sergio Henao clinching third. Henao took the win at the Volta ao Algarve and finished second at La Flèche Wallonne. Carlos Betancur (AG2R) has proved himself this year with great classics finishes in La Flèche Wallonne (3rd) and Liège–Bastogne–Liège (4th) then garnering a superb grand tour performance clinching 5th and the young rider’s jersey in the Giro (Uran won it last year). In fact, four of the top 20 in this year’s very tough Giro were Colombians.

Traditionally, the European peloton has been dominated by the European powerhouses of cycling. France, Italy, Belgium, Spain. For all the excitement in the US cycling media about Tejay finally coming good* and Talansky about to, a look at the WorldTour standings reveals a fascinating picture of where the young talent is coming from. Of course the season has a way to go, we’ve still got two grand tours and the world championships, but I doubt many would have predicted that Colombia would be 2nd in the world rankings right now with 766 points. In contrast, the USA is sitting 12th with 296, and with two very lumpy three week races coming up, you can bet the young Colombians will be to the fore again.

The Americans are back! They just happen to be South Americans.

*Yes, Tejay won the Amgen Tour of California. How many WorldTour teams were there? Let’s not forget who won that grueling 109F climb in Palm Springs – Janier Acevedo from Colombia, on a little continental team, who went on to finish third overall.